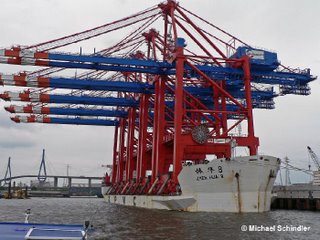 And winning in Australia and New Zealand:

They stand 73m tall - 8m higher than the Auckland Harbour Bridge - on a ship the size of 2 1/2 rugby fields.

....Weighing 1250 tonnes each, the cranes were made by the Zhenhua Port Machinery Company on the Yangtze River in Shanghai.

....Though the ship may look ungainly and liable to overbalance, it stays upright in high seas by a process known as reballasting.

The ship contains a number of cells that can be filled with water to give it extra stability.

Ports of Auckland corporate communications manager Karen Bradshaw said the new cranes would be the fastest, biggest and most productive container cranes in the country.

Each crane has longer booms and increased lifting power and speed and at full stretch rises to a height of 103m.

The diesel-electric straddle carriers are more efficient, give out fewer exhaust emissions and can be used as generators to power critical re-frigerated cargo in the case of power failure.

.... The 244m Zhen Hua 11 (by comparison the Queen Mary 2, due here in February, is 345m) can raise itself to dock level, allowing an easy transfer of the cranes using a computerised system that allows it to pump water in and out of the hull.
Posted by Patrick Sullivan at 10:25 AM