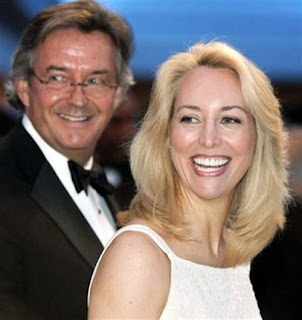 Now that the Scooter Libby trial is about to reach its denouement, the Fly Under the Bridge Academy's subcommittee on L'affaire Niger notes that it is just past the fifth anniversary of that fateful day, February 12, 2002, when CIA superspy 00Plame launched her husband Joe's media career. Catapulting both of them to fortune and fame.

Unfortunately for the story that Ambassador Wilson was peddling to anyone who would listen in Washington DC in the Spring of 2003, the supposed impetus for the trip--a briefing of the Vice President on reports of Iraq's purchasing uranium in Africa--didn't take place until the next day.

The denizens of Just One Minute have known of this problematic timeline for somewhile--thanks to frequent commenter Cecil Turner--and now it has finally come to the attention of National Review's Byron York too:

If the timing spelled out in the new document is accurate — if Wilson had already been picked for the task by February 14 — the new evidence sheds a different light on the version of events given by Wilson himself in his book The Politics of Truth. In that, Wilson wrote about a meeting with CIA officials — a meeting that took place on February 19, 2002 — at which “I was asked if I would be willing to travel to Niger to check out the report in question.” Perhaps Wilson was indeed asked to go to Niger at that meeting, but the newly-released CIA document suggests the agency settled on Wilson several days earlier.

But, we wouldn't have Joe Wilson, change one hair for us. This Valentine's Day.
Posted by Patrick Sullivan at 6:12 AM