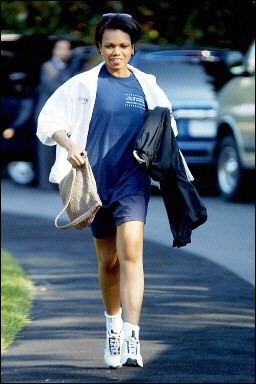 According to this, she's pulling a Jane Fonda for early AM television:

US Secretary of State Condoleezza Rice will flex more than her diplomatic muscles when she demonstrates her personal workout regime on network television this week.

In an unusual departure for such a high-profile official, Rice not only pumps some iron, but also discusses how she manages to stay fit during her continual globetrotting and reveals strategies for coping with high-calorie banquets.

"She is tough, I have to tell you," said Barbara Harrison, a news co-anchor with the NBC4 channel in Washington who persuaded Rice, 51, to put on her gym sweats and participate in a regular segment on health and fitness.

"She is amazing. The amount of weights she handles and the endurance she has ... As a person who has exercised all my life, I was very impressed," said Harrison, who joined in the workout at the State Department gym with Rice and her personal trainer.

"She looks good throughout the whole workout," Harrison added.

Posted by Patrick Sullivan at 7:36 AM