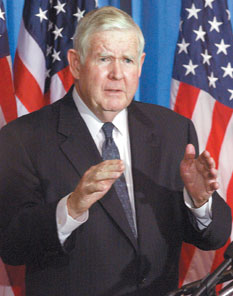 Ann says it's Democrats in Congress who had the bright idea to talk up the idea of surrendering to the jihadists we're currently defeating:

Saddam is on trial. His psychopath sons are dead. We've captured or killed scores of foreign terrorists in Baghdad. Rape rooms and torture chambers are back in R. Kelly's Miami Beach mansion where they belong.

The Iraqi people have voted in two free, democratic elections this year. In a rash and unconsidered move, they even gave women the right to vote.

Iraqis have ratified a constitution and will vote for a National Assembly next month. The long-suffering Kurds are free and no longer require 24/7 protection by U.S. fighter jets.

...It is simply a fact that Democrats like [John] Murtha are encouraging the Iraqi insurgents when they say the war is going badly and it's time to bring the troops home. Whether or not there is any merit to the idea, calling for a troop withdrawal — or "redeployment," as liberals pointlessly distinguish — will delay our inevitable victory and cost more American lives.

Anti-war protests in the U.S. during the Vietnam War were a major source of moral support to the enemy. We know that not only from plain common sense, but from the statements of former North Vietnamese military leaders who evidently didn't get the memo telling them not to say so. In an Aug. 3, 1995, interview in The Wall Street Journal, Bui Tin, a former colonel in the North Vietnamese army, called the American peace movement "essential" to the North Vietnamese victory.

"Every day our leadership would listen to world news over the radio at 9 a.m. to follow the growth of the American anti-war movement," he said. "Visits to Hanoi by people like Jane Fonda and former Attorney General Ramsey Clark and ministers gave us confidence that we should hold on in the face of battlefield reverses."

Of course they could only scare up three out of 438 votes when push came to shove. Not even John Murtha would vote in favor of his own proposal. For that at least, we can give thanks.

Posted by Patrick Sullivan at 4:32 PM