Have Yourselves a Merry Little Christmas 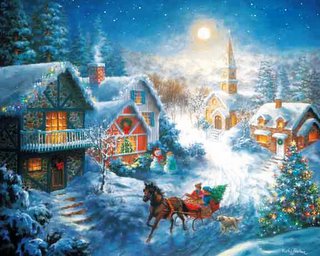 Without Hollywood. If you're a soldier in Iraq:

During world war two American troops away from home for Christmas were entertained by Marlene Dietrich, Bing Crosby and the Marx Brothers. Even in Vietnam Bob Hope was guaranteed to put in an appearance. But soldiers in Iraq are more likely to get a show from a Christian hip-hop group, a country singer you have probably never heard of and two cheerleaders for the Dallas Cowboys.

Just as the seemingly intractable nature of the war has led to a growing recruitment crisis, so the United Services Organisation, which has been putting on shows for the troops since the second world war, is struggling to get celebrities to sign up for even a short tour of duty.

.... Wayne Newton, the Las Vegas crooner who succeeded Bob Hope as head of USO's talent recruiting effort, told USA Today. "Now with 9/11 being as far removed as it is, the war being up one day and down the next, it becomes increasingly difficult to get people to go."

Newton said many celebrities have been wary of going because they think it might be seen that they are endorsing the war. "And I say it's not. I tell them these men and women are over there because our country sent them, and we have the absolute necessity to try to bring them as much happiness as we can."

Fear is also a factor. "They're scared," country singer Craig Morton, who is in Iraq on the USO's Hope and Freedom Tour 2005, told USA Today. "It's understandable. It's not a safe and fun place and a lot of people don't want to take the chance."
Posted by Patrick Sullivan at 7:24 AM