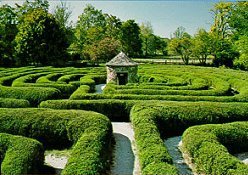 One of those idiosyncratic Telegraph obituaries for a labrynthologist:

Randoll Coate, the labyrinthologist [and WWII commando] who died on December 2 aged 96, became a designer of elaborate symbolic garden mazes after retiring from the Foreign Office; there are examples of his work in Buenos Aires and at Blenheim Palace.

....Working alone and in partnership with the maze designer Adrian Fisher, he created more than 50 mazes around the world.

In Britain he designed (with Fisher) the Archbishop's Maze at Greys Court, near Henley, created to commemorate the maze metaphor Robert Runcie employed in his enthronement address when he became Archbishop of Canterbury in 1980.

Other creations include the Marlborough Maze at Blenheim, the Roxburgh Maze at Floors Castle (with Adrian Fisher), and the Sun Maze and Lunar Labyrinth at Longleat. He designed the Millennium Maze for the Borghese Gardens in Rome, and the memorial maze in Buenos Aires for his friend Jorge Luis Borges, inspired by the writer's short story The Garden of Forking Paths, and in which Coate used smooth stones to pick out in Braille the blind writer's celebrated quote that a book and a labyrinth are one and the same.

Led us to a Tyler Cowen moment. That the market for labyrinths and mazes is booming thanks to the prosperity of recent years:

In the nineteenth century, the unprecedented wealth of the Industrial Revolution provided the first stirrings of a leisure industry, and many new hedge mazes were built in parks and other places, for general public amusement. Wealthy private families also added mazes to their gardens. The maze at Hampton Court, the oldest hedge maze in Britain. The design has been copied over a dozen times.

In the first half of the twentieth century, two world wars forced gardens to be neglected, and many mazes were irretrievably lost. The world-wide upsurgence of mass leisure, travel and tourism since the 1970's has created a new market for mazes. As a result, more mazes are being built today than at any time in their history. In Japan alone, some 200 were built during the 1980's. New mazes have appeared throughout Europe, North America, Australasia and the Far East.

In Britain, there are now over 125 mazes open to the public, compared with 42 in 1980. One distinctive aspect of British mazes is their diversity, with possibly the widest range of forms of maze of any country in the world. Hedges mazes are particularly distinctive to Britain, whilst mazes using turf, brick, stone, wood and water are also widespread. Indoors, there are mazes made of mosiac, marble and stained-glass, as well as mirror mazes.