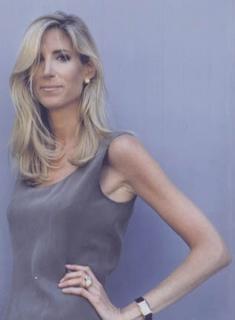 Odd that Ann Coulter would publish a column knocking John Roberts nomination to the Supreme Court:

...we don’t know much about John Roberts. Stealth nominees have never turned out to be a pleasant surprise for conservatives. Never. Not ever.

Because, when he was being denied a hearing on his nomination to the Appellate Court by Patrick Leahy she defended him as a fellow Federalist Society member and holder of impeccable qualifications:

It turns out what the Democrats mean by "selected primarily for their ideology" means the nominee went to top law schools, had prestigious federal clerkships, went on to distinguished legal careers -- but are believed to be Republicans. Evidence of "extreme views" consists of association with the Federalist Society....

As legal scholar Sen. Chris Dodd, D-Conn., explained: "We don't want this to be a judiciary jammed and packed with people who've come out of the Federalist Society with extreme views."
Consequently, Bush had already purged his list of judicial nominees likely to incite a Democratic witch hunt. He withdrew the names of two Harvard Law School graduates -- one a Supreme Court clerk, one a U.S. congressman -- after Democrats discovered with alarm that the two had suspicious associations with the Federalist Society. To get a fair shake from the Democrats, the Federalist Society should change its name to "Communist Party U.S.A."
Posted by Patrick Sullivan at 4:39 PM