No Way To Treat a Lady 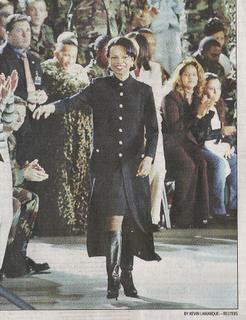 Especially one who could kick your butt.

pgl at Angry Bear picks up on an attempt to smear the beautiful and charming Condi by TPM Cafe:

...a key exchange on the [Joseph] Wilson trip did occur in the July 11, 2003 press gaggle aboard Air Force One with both Ari Fleischer and Condoleezza Rice and it wasn’t Ari pushing the Wilson story.

The transcript of the July 11, 2003 press gaggle has this interesting exchange:

Q Dr. Rice, when did you all find out that the documents were forged?

DR. RICE: Sometime in March, I believe. Is that right?

MR. FLEISCHER: The IAEA reported it.

DR. RICE: The IAEA reported it I believe in March. But I will tell you that, for instance, on Ambassador Wilson's going out to Niger, I learned of that when I was sitting on whatever TV show it was, because that mission was not known to anybody in the White House. And you should ask the Agency at what level it was known in the Agency.

Q When was that TV show, when you learned about it? DR. RICE: A month ago, about a month ago.

In reading the whole transcript you’ll find that no reference to Wilson had been made before Condi brings it up.

So Condi uses a barely-related question to bring up the issue about why Wilson was sent to Niger. She offers the news that he was not sent by the White House and then literally prods the reports to go ask the CIA why he was sent.

Then, when a reporter tries to change the subject she prods the reporters to ask more with: “Are you sure you're through with this?”

There are a number of out and out deceptions here. First, the informal press conference (gaggle) is well underway before Condi says anything about the Niger uranium controversy, and only after being twice asked about it.

From the point of the second Niger question, the transcript goes on for eight pages and 4,300 words before the exchange that TPC Cafe is making a big deal out of:

Meaning that she's making a joke, son. You know, 'You're sure we've beaten this dead horse enough already?' (and they hadn't, as she's immediately interrupted with more on Iraq during a trip in Africa)

Almost as misleading was the claim that no reference had been made to Wilson before Condi brought it up. His name hadn't been mentioned, but clearly she was being bombarded with questions about the intelligence on Iraq's attempts to acquire uranium in Africa. Questions that had begun with Joe Wilson's duplicitous stories told to the likes of Nick Kristoff two months earlier, and culminating in Wilson's own Op-ed piece in the NY Times claiming that that intelligence had been twisted by the White House.

I'm told by a person involved in the Niger caper that more than a year ago the vice president's office asked for an investigation of the uranium deal, so a former U.S. ambassador to Africa was dispatched to Niger. ... that envoy reported to the C.I.A. and State Department that the information was unequivocally wrong and that the documents had been forged.

.... The envoy's debunking of the forgery was passed around the administration and seemed to be accepted — except that President Bush and the State Department kept citing it anyway.

Two months later Wilson outed himself (and inevitably his wife's role in his dishonest partisan campaign on behalf of John Kerry) by writing:

Did the Bush administration manipulate intelligence about Saddam Hussein's weapons programs to justify an invasion of Iraq?

Based on my experience with the administration in the months leading up to the war, I have little choice but to conclude that some of the intelligence related to Iraq's nuclear weapons program was twisted to exaggerate the Iraqi threat.

It's that context that led to Condi Rice being questioned by the press 'gaggle' about the intelligence behind the Africa uranium seeking, and thus it is entirely unremarkable that Joseph Wilson's name would come up less than a week after his NY Times column and subsequent Meet the Press appearance.

And two days later, Condi was asked, by Wolf Blitzer:

BLITZER: But 11 months earlier, you, the Bush administration, had sent Joe Wilson, a former U.S. ambassador to Niger....

RICE: Well, first of all, I didn't know Joe Wilson was going to Niger. ...counterproliferation experts on their own initiative sent Joe Wilson, so I don't know...

BLITZER: Who sent him?

BLITZER: Supposedly, it came at the request of the vice president.

RICE: No, this is simply not true, and this is something that's been perpetuated that we simply have to straighten out. The vice president did not ask that Joe Wilson go to Niger.

The vice president did not know. I don't think he knew who Joe Wilson was, and he certainly didn't know that he was going. The first that I heard of Joe Wilson mission was when I was doing a Sunday talk show and heard about it.

Given the false impressions about who asked Wilson to go to Niger, it was inevitable that his wife's role in his anti-Bush campaign would come out. Any CIA spook who didn't realize that has no business in the intelligence profession.
Posted by Patrick Sullivan at 3:21 PM