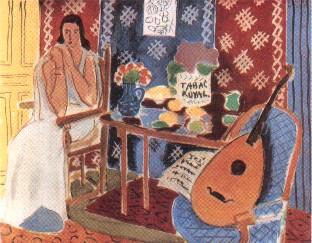 Sister Jacques-Marie, who has died at the age of 84, was the student nurse, later a Dominican nun, who tended Henri Matisse after a major operation in 1942, going on to pose for him and eventually to inspire the work he considered his last masterpiece, the Chapel of the Rosary at Vence.

....Monique was shy, inexperienced and so unworldly that she had never worn make-up, let alone read a book without asking her mother first. Matisse dressed her in a filmy, sleeveless chiffon dress with a plunging neckline, painting her lightly and rapidly in deep, soft, earthy colours, outlining her face and figure with yellow-ochre brushstrokes that radiate like fansticks between the flat grey planes of her dress.

This first canvas, Monique in a Grey Dress, like the three other paintings he made of her - L'Idole, La Robe Verte, Tabac Royal - conveys her statuesque quality, a majestic inner poise and strength only he could see at that stage. The sitter, who had artistic aspirations herself, was bitterly disappointed: "Instead of the realistic portrait I had waited impatiently to see, just lines and blobs of colour."

Monique's father had recently died of wounds, leaving his family homeless and destitute - they had abandoned everything to flee Metz in cattle trucks at the start of the second world war - with no source of support except the eldest daughter, herself weakened by tuberculosis, malnutrition and exhaustion. Matisse, lonely and isolated in wartime, missing his own children and grandchildren, gave her food coupons and practical advice, becoming a fond adoptive grandfather.

Separated, then reunited by war, the two by chance ended up living opposite one another in 1946 in Vence, where the painter had rented temporary accommodation as an evacuee. His former model was by this time a Dominican novice.

Initially horrified by her decision to take the veil, Matisse came to accept that Sister Jacques-Marie's life of austere discipline and dedication paralleled his own. When she showed him her design for a stained-glass window to beautify the leaky garage the nuns used as a chapel, his enthusiasm got the better of him. Within days he had taken over the putative chapel, designing everything, including two great ranges of radiantly coloured windows.

Scandalised by Matisse's reputation for painting sexy pictures, Sister Jacques-Marie's mother superior fiercely opposed the project, but her resistance proved no match for his unbudgeable will. ....

After the chapel opened in 1951, the press compounded her troubles by inventing titillating stories about the old painter and the young nun. "The builders of churches," her novice mistress told her sternly, "have never achieved anything good or beautiful without being crucified for it."

Posted by Patrick Sullivan at 1:08 PM