Not on our beach, you won't 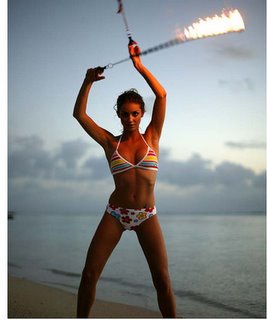 About 1 500 spectators were disappointed when police snuffed out a weekly performance of fire dancers and drummers on Second Beach, Clifton, on Monday night.

Among those who were refused permission to fire-spin was model Tanit Phoenix.Phoenix said: "My dad taught me and it is such a wonderful way to release negative energy." She said "about 30 cops" had arrived on Monday night and threatened to arrest anybody with an open flame.

Jon-Peer Bouwer, director of Firetribe, which organises the event, said the group had been gathering since 2001 and had received no objections.

But on Monday night a resident had complained.
Posted by Patrick Sullivan at 7:04 AM