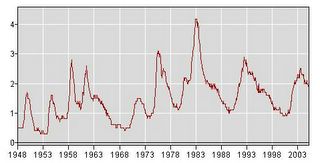 Revisiting this post which centers on Paul Krugman's claim that:

Over the past 25 years the lives of working Americans have become ever less secure. ...workers lose their jobs more often, and unemployment lasts much longer than it used to.

The graph is the percentage of the civilian workforce unemployed for 16 weeks or more, seasonally adjusted. From the Bureau of Labor Statistics.

It clearly shows that in the 1950s the trend was steeply up. As it was after the end of the Vietnam war until the Reagan Revolution.

It has not hit 3% of the workforce since the recovery from that severe early 80s recession--itself a by product of the stagflation of the 1970s. The peaks and trought post-1983 clearly are trending downward. We, of course, don't know what the trough will be for this cycle.

Posted by Patrick Sullivan at 2:40 PM