The Trust Fund; It's Only Make Believe 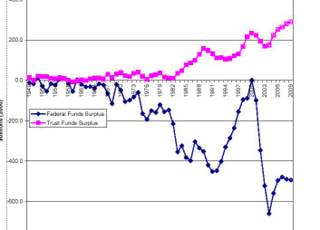 The above graph destroys any argument that the Social Security 'Trust Fund' (or any Federal government 'trust fund') contains real economic assets. It's from this paper: which corroborates Kent Smetters' findings that the existence of the Social Security Trust Fund led politicians to spend not only its total amount, but even more.

Economists Nataraj and Shoven blame congressional adoption of the Unified Budget in 1970 as creating the illusion of governmental wealth, while the reality was to actually decrease saving.

The red line (top) charts all Federal 'trust funds', while the blue line (bottom) shows the complete Federal budget. It's clear that, with the exception of the late 90s dot com bubble years, congresses squandered it, and that what should have been obvious to anyone who took a few moments to think seriously about it, is true: There's no such thing as an I.O. Me.

Posted by Patrick Sullivan at 10:07 AM