We Can Almost Hear the Nervous Laugh... 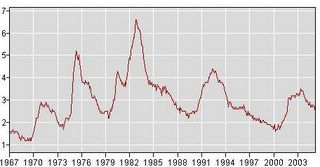 ...Professor DeLong had to have made when attempting to to defend his professional colleague's claim:

[The "lose their jobs more often" makes a distinction between temporary layoffs and permanent dismissals that you are missing. Paul's fine here.]

The above graph (courtesy of the BLS) is of people who have lost their jobs and are looking for work from 1967 (apparently the first year for which they have the data) to the present. And it is again clear that prior to the Reagan Revolution that trend was worsening--whether you look at peaks or troughs--but, since then the trend is one of improvement.

That is, Krugman is once more refuted. We hope Robert Waldman is happy.

Posted by Patrick Sullivan at 5:54 PM