[UPDATE] Why Bother To Think About the Numbers You Throw Out? 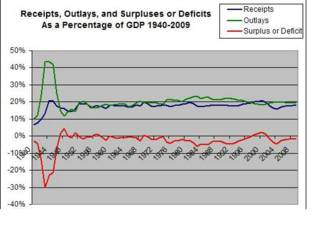 A distinguished economist of our acquaintance tells the world:

The Feds are going to need 30 percent of GDP to pay for government over the next 75 years. Increased taxation is going to have to be paid by many more than "the rich."

When informed by a knowledgeable outside authority that that percentage will be impossible to even come close to, much less attain, he responds:

Maybe not, so the FLUBA Committee on the Bloody Obvious will add a few: The six decades of history represented on the graph encompasses years with top marginal tax rates as high as 91% (and as low as 28%), note that the blue line (revenues) rarely even touches 20%.

It's average is a little over 18%. To get to 30% would require a 67% increase in revenues. Any attempt to do that will not only fail, but will impoverish millions of ordinary Americans caught in the depressive wake.

The Reality Based Community is invited to put that in their pipes and....

UPDATE: Max has apparently inhaled, and believes (near as we can tell) that he knows a secret way to generate $ 1-1/2 trillion in revenue from a securities transfer tax:

I'd use income taxes and the estate tax. Maybe a securities transfer tax.

Of course we've been using income and estate taxes during the past six decades and getting only 18% of GDP regardless of the rates imposed. Meaning that he'd need 12% of our $12-1/2 trillion (2004 dollars) GDP from his new securities transfer tax. And that that wouldn't lower the take from the income and estate taxes.

Posted by Patrick Sullivan at 2:59 PM