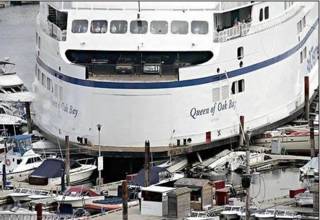 Bad news; you have to get it from the same guys who maintained and piloted the ferry:

A British Columbia ferry lost power, smashed into a number of boats and ran aground at a
marina while docking today at Horseshoe Bay in West Vancouver.

....Witnesses said at about 10 a.m., the 457-foot Queen of Oak Bay missed the terminal berth and was blowing its horn as it crashed into Sewell's Marina. The ferry, part of the province's extensive fleet of boats to connect Vancouver Island and other coastal areas to the mainland, was arriving from Nanaimo on Vancouver Island.

....The accident occurred as many British Columbia residents were expected to flock to the ferries at the start of the long Canada Day weekend.

The Queen of Oak Bay returned to service on the run from West Vancouver to Nanaimo earlier this month after an extensive, $35 million upgrade.

Posted by Patrick Sullivan at 2:18 PM