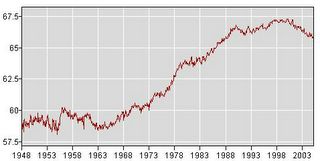 Ronald Reagan's favorite joke was this:

Worried that their son was too optimistic, the parents of a little boy took him to a psychiatrist.

Trying to dampen the boy’s spirits, the psychiatrist showed him into a room piled high with nothing but horse manure. Yet instead of displaying distaste, the little boy clambered to the top of the pile, dropped to all fours, and began digging.

“What do you think you’re doing?” the psychiatrist asked.

“With all this manure,” the little boy replied, beaming, “there must be a pony in here somewhere.”

Paul Krugman, Brad DeLong, and the Angry Bears' favorite appears to be the reverse. Confronted with the galloping horses of strong economic news of the past year or so, and the concomitant decrease in the unemployment rate, the subject is now being changed.

The labor force participation and ratio of employed people to total population must be the manure pile in all this.

Yet, this maneuver leaves Paul having stepped in it with his recent claim that since 1973 his middle class country has been destroyed (by the nefarious Reagan and his Wayback Machine). Because, if the Labor Force Participation Rate is the thing to look at, then the economy post-1973 looks better than ever according to the above graph. And the supposed Golden Age of compressed incomes from 1947-1973 positively anemic.

Posted by Patrick Sullivan at 3:32 PM