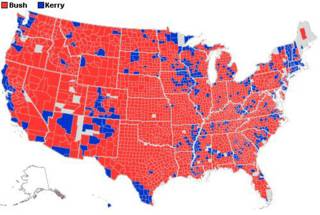 What's That Phd In, Josh?

"We've worked hard and gained many new friends, and the result is now clear -- a record voter turnout and a broad, nationwide victory."

This is the touchstone and the sign. A 'broad, nationwide victory'? He must be kidding. Our system is majority rule. And 51% is a win. But he's claiming a mandate.

It would almost be comical if it weren't for the seriousness of what it portends. This election cut the nation in two. A single percentage point over 50% is not broad.

An e-mailer with even less of a clue than Josh Marshall, objects:

I've just seen your recent map proving that the election wasn't really close after all, even though Bush won with only 51%, because he won a lot of great big rural counties with few people in them. *sigh*

The Fly Under the Bridge Academy, pointed him to the actual words of Dr. Marshall:

A single percentage point over 50% is not broad.

Emphasizing the word, "broad" (it's used four times in what was quoted above). To no avail:

Please.... Do at least TRY to use your head. As Marshall pointed out, by "broad, nationwide victory" Bush was obviously claiming that he had a large victory margin....Otherwise, why would he have mentioned the geographical way his narrow win was distributed? "A single percentage point over 50% is not broad.

Oscar Wilde-like, the Academy--having forgotten that the e-mailer was one of the usual suspects from Semi-Daily Journal's comments section--apologizes for the overly subtle picture drawn. We should have added:

The FLUBA regrets the omission.

Posted by Patrick Sullivan at 6:40 AM