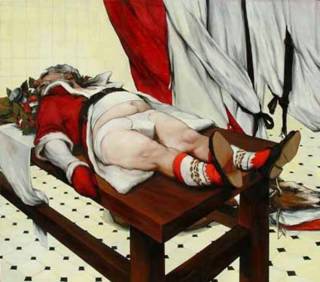 The FLUBA tears away the curtain and exposes the plight of the Santa industry:

He wishes the holiday season would end already. His back aches, his red suit feels like a spacesuit, his cheeks have gone numb from smiling for 12 hours — and still the children keep coming and coming, like ants at a picnic.

"When the last gig of the season is 'finito,' " said Victor Nevada, 61, a professional Santa Claus in Calgary, Alberta, "I have a bottle of rye whiskey and some Diet Coke by the bed, and a couple of novels, and I'll phone in for pizza, and I won't get out of bed for two days, and if I don't see another child again till next Christmas — that's OK with me."

....there's the competition. Top Santas can earn $60,000 a season working the ritziest malls, said Nevada, who charges $500 an hour for his appearances. With so much money on the line, the need to be realistic, to be relevant, to be the best, is intense — and competition among malls is that much stiffer. Every mall wants to say it has the real Santa under contract, to attract the maximum number of shoppers.

....40,000 men in North America are working the same side of Santa Street, vying for the same malls, parades, private parties and corporate events. And more are coming. As baby boomers age...they will seek ways to augment their retirement income....

[Perhaps Kevin Drum is right after all, there is no Social Security crisis!]

Before getting hired by a major mall or photo company, Santas typically must undergo stringent background checks and fingerprinting. After getting hired, they must carry insurance.

"When I started doing this years ago, I never even thought about liability," Nevada said. "But Santas have a pretty good chance of getting sued. You got the obvious things: You drop a child on its head. Then there's Santa saying the wrong thing to a child — that can be a problem. I had a Santa working for me a couple years ago; he had a girl on his knee and he commented, 'You have nice eyes and nice hair.' She claimed sexual harassment."

....Ed Butchart, 69, a Santa for 17 years in Stone Mountain, Ga., .... had to shell out recently for a pricey pair of steel-toed black boots, "because of kids jumping off my lap and killing me. ... I don't wear a cup or nothing, but it's all in how you sit on your throne. That kid can really hurt you bad."

A chat room called Santas Across the Globe is beset by Santas worried about things such as flu shots, head lice, the most effective antibacterial hand soaps, the pros and cons of fake beards made from yak hair — and "inappropriate offers while touring seniors centers." There is also some troubled discussion of how to respond to certain photographers who want to pose Santa in unsavory positions and settings, sans red suit.

When a Santa feels put upon or anxious, he often shows it in the same ways civilians do. Nevada has one friend, an immensely popular Santa at a large mall, who recently completed counseling for job-related depression.

"I'll get calls from people wanting to engage my services," Nevada said, "and I always ask, 'Would I be right in thinking you had a Santa at your event last year? I'm curious why that Santa isn't there this year.' And they'll say, 'Oh, the guy showed up drunk.' That's common."

Posted by Patrick Sullivan at 11:25 AM