That's Not a Crisis. That's a Banana. 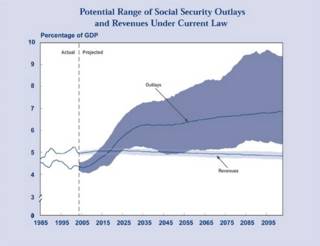 It's important to keep these distinctions in the forefront of the debate says Kevin Drum, because now that he's an expert he knows:

As a well-informed citizen, I knew that Social Security was unsustainable, that life expectancies were increasing, that fewer workers would be supporting more retirees in the future, and in general, that the program was facing a demographic timebomb that would cause it to go bankrupt within a couple of decades.

This was back in the mid-90s, and for some reason I took an interest in finding out more. So I wrote off for a copy of the trustees report, read up on tax policy and demographic projections, pored through various analyses, and — to my surprise — learned that the problem was either (a) fairly modest and quite solvable or (b) not a problem at all.

Social Security is going to get more expensive over time, but it's not going to keep getting more expensive forever. Starting in about a decade costs will go up, but then, after about 20 years, they'll flatten out. And the size of the increase, from about 4% of GDP to 6% of GDP, just isn't a crisis. What's more, when you start to study the trustees' projections, you realize that even their "intermediate" projection is pretty conservative. It's quite possible that if we leave the system completely alone it will be fine. And even if it's not, there's plenty of time to make the small tweaks necessary to keep it properly funded.

In other words, after actually studying the issue, I changed my opinion almost 180 degrees. Nothing is going bankrupt, benefits will continue to be paid forever, and future funding problems are both modest in size and not that hard to deal with.

What do those CBO guys know, anyhow.

Posted by Patrick Sullivan at 5:48 PM