Taking One For The Team 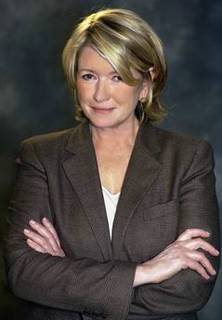 Martha's Christmas Card for her fans is up:

I am fine, really. I look forward to being home, to getting back to my valuable work, to creating, cooking, and making television. I have had time to think, time to write, time to exercise, time to not eat the bad food....

Which is quite a bit more gracious than what a fictional character in her predicament said:

...there can be no doubt that behind all the actions of this court of justice, that is to say in my case, behind my arrest and today's interrogation, there is a great organization at work. An organization which not only employs corrupt warders, oafish Inspectors, and Examining Magistrates of whom the best that can be said is that they recognize their own limitations, but also has at its disposal a judicial hierarchy of high, indeed of the highest rank, with an indispensable and numerous retinue of servants, clerks, police, and other assistants, perhaps even hangmen, I do not shrink from that word. And the significance of this great organization, gentlemen? It consists in this, that innocent persons are accused of guilt, and senseless proceedings are put in motion against them...

A more scholarly variation on this theme can be had here. From which:

Eventually, Ms. Stewart, MSO, Merrill Lynch, ImClone, Messrs. Waksal and Bacanovic would supply 200,000 pages of paper documents, more than 1.2 million pages of documents in electronic form, the hard drives of 20 computers, nearly a year of telephone records involving 175 different phone numbers, and complete records of electronic mail messages. Ms. Stewart's friends and employees were interviewed, in addition to the day's principal dramatis personae, and all of Ms. Stewart's personal financial records were sifted. What did this massive body of data, gathered presumably at considerable taxpayer expense, disclose? Not much. No phone call from Mr. Waksal to Ms. Stewart. Nothing to establish Ms. Stewart or even Mr. Bacanovic knew anything more than "market" information (as opposed to anything specific concerning the adverse FDA decision). And virtually nothing either way to substantiate or disprove Ms. Stewart's claim to having an informal understanding with Mr. Bacanovic that she would sell her last 4,000 shares of ImClone when its price dropped to $60 (this out of 55,000 shares of ImClone that Ms. Stewart began disposing of, along with the bulk of her "retirement" portfolio, over the previous three months).You might think the office of the U.S. attorney (and their superiors in the Justice Department) would conclude this would be an excellent occasion to exercise their prosecutorial discretion, admit the investigation was a bust, and abandon an unbelievably unpromising insider-trading case. But you would be wrong.

Posted by Patrick Sullivan at 11:16 AM