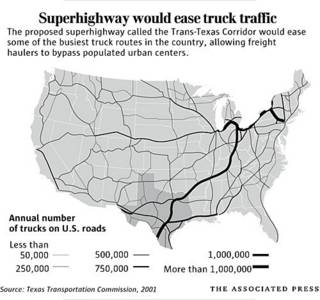 From the White House to CEO of the Highways? That might be a productive use of a sixty-two year old's Harvard MBA, if the ayes of Texas lead to Alaska-sized highways.

In what sounds like another tall tale told by a Texan, the Lone Star State has embarked on an audacious project to build superhighways so big and so complex that they would make the interstates of today look like cow paths.

The Trans-Texas Corridor project, as envisioned by Republican Gov. Rick Perry in 2002, would be a 4,000-mile transportation network costing $175 billion over 50 years, financed mostly if not entirely with private money. Builders would charge tolls.

But these would not be mere highways. Proving anew that everything's big in Texas, they would be megahighways — corridors up to one-quarter mile wide, consisting of as many as six lanes for cars and four for trucks, plus railroad tracks, oil and gas pipelines, water and other utility lines, even broadband transmission cables.

Posted by Patrick Sullivan at 8:28 AM